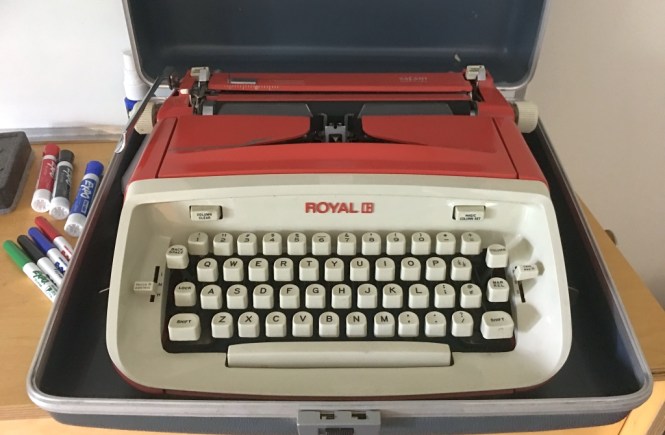 A few weeks ago I acquired, courtesy of some lovely eBay seller, a vintage 1960s Royal Safari manual typewriter. The original reddish color has faded to a rich orange. Apart from one scrape along the top, the typewriter and its original hard-sized carrying case are in mint condition. Just to be safe, I also grabbed a few replacement ribbons through Amazon. The Safari joins my Royal KMM (a 1940s-era behemoth) as my manual typewriters of choice, although I also have a fairly basic Brother GX-6750 electric typewriter in the office, too.

But here’s the thing.

Once upon a time, authors typed their manuscripts. They may have planned their stuff in sundry notebooks, or wrote longhand and transcribed later, but the final product consisted of one sheet of paper being fed into one iron-and-ribbon device at a time. If you wanted several copies, you could always use carbon paper — or hire a professional typist to churn out more.

Despite having been born in the Ford Administration and growing up with computers (I was programming in PET Basic on my Commodore 64C as a middle-schooler in the ’80s), my high-school teachers taught us how to develop term papers using typewriters. As in: Use notecards, outline first, then type the paper. And if you need to revise, grab your scissors to physically cut paragraphs and staple them in order. When you’re done, retype the final product.

Nowadays, writers rely on word processors and laser printers. Many rounds of revisions may be safely conducted through electronic bits and bytes stored on local drives and The Cloud. Writing thereby becomes easier. And writers are more prolific. But being prolific doesn’t necessarily translate to being better. It just means there’s more stuff swirling around.

As a creative-writing exercise, I recently wrote a flash story the old-fashioned way. I fetched an old Moleskine notebook, planned out the story paragraph-by-paragraph, then fed paper into the KMM and let-r-rip.

Funny thing: Not having an effective backspace or CTRL+A/DELETE capability means you really, really, really need to think about what you’re writing. There’s no word-processor screen to serve as a whiteboard. You must type — efficiently, accurately. And get it right in one pass, or maybe two. Not 27.

I recommend that all writers try the typewriter method at least once in their careers. These devices are fairly cheap on eBay or Amazon. And for the Millennials out there, writing on something that’s not a smartphone soft keyboard might prove to be a good range-of-motion activity for your fingers.

Most importantly, the typewriter method makes you think. It makes you plan. It makes you realize that writing only sometimes features rapid-fire composing then revising, but it always requires getting the story right in your heart so that it fills your head and then flows from your fingers toward the paper — even if it’s through one type hammer at a time.

The Expansion of the Grand River Writing Tribe

Writers in an Era of Social Distancing

Writing a Book in AsciiDoc with Version Control and Collaborative Authors